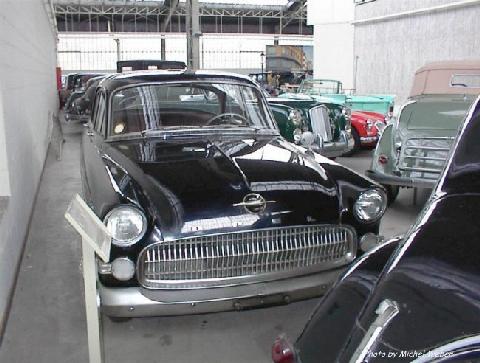 The Opel Kapitän was a car made in several different generations by the German car manufacturer Opel from 1938 to 1970.

The Kapitän was the last new Opel model to appear before the outbreak of the Second World War, developed during 1938 and launched in the spring of 1939 at the Geneva motor show. The first Kapitän was available in many different body styles, the most popular one being the 4-door saloon. 2-door coupé cabriolets were also built. The pre-war Kapitän featured a unitary body, a modern feature for its time.

Civilian automobile production by Opel ceased in the Fall / Autumn of 1940, by which time 25,371 Kapitäns had been produced: a further three were assembled during 1943, giving a total production volume for the version launched in 1939 of 25,374.   Included in the production total were 248 of the two seater cabriolets built for Opel by independent coach builders Gläser of Dresden and Hebmüller of Wülfrath in Wuppertal. There would, however, be no resurrection for the cabriolet Kapitäns in 1948 when the sedan / saloon version was reintroduced.

From May 1957, a semi-automatic 3-speed overdrive transmission with an additional fourth gear became available on request.

From November 1953 to February 1958, 154,098 Kapitäns were built. In its time, this generation was the third most popular car in Germany behind Volkswagen´s Beetle and Opel's own Rekord (Oswald, p. 73).

In 1964, Opel introduced the completely new KAD (Kapitän, Admiral, Diplomat) models; the Kapitän served as the base model of this three-tier model range.  It was powered by the same engines as the contemporary Opel Admiral, namely a 2.6 l-inline six or a 2.8 l-six; a few Kapitäns even received the Chevrolet-sourced 4.6 l-V8. For the Austrian market, 580 Kapitän and Admiral models received a 2.5 l-six with an output of 112 PS (82 kW; 110 hp) in 1966/67.  Like its more expensive brethren, the Kapitän was reworked in late 1967 and received rub strips, a new ZF steering and a collapsible steering column. At the same time, a new HL (Hochleistung = high performance) version of the 2.8 l-six became available that put out 140 PS (103 kW; 138 hp).   Sales of the Kapitän A fell sharply off; up to its discontinuation in November 1968, a total of 24,249 cars left the factory.

The Kapitän B was introduced in 1969 and was the last car bearing the Kapitän name. Engine options included a 1-bbl 2.8 l-inline six or a 2-bbl version of same, coupled with a 4-speed manual or Opel's 3-speed automatic transmission.   Production ended in May 1970. The Admiral and Diplomat lived on for another seven years until they were replaced by the Senator in 1978.   Just 4,976 Kapitan B models were built in 15 months.


Source: Wikipedia
Have you any further information on this car?
Click here to tell us.
There are 6 further pictures
[View Full Gallery]
Related Contacts
[ suggest a contact ]
Related Links