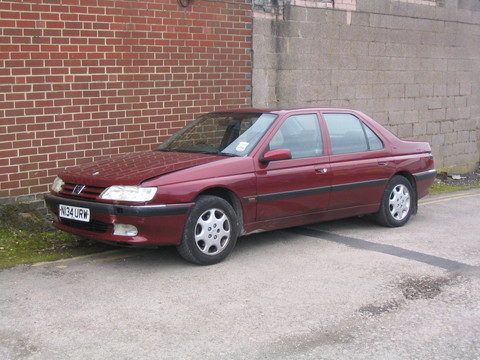 The Peugeot 605 is an executive car produced by the French manufacturer Peugeot between 1989 and 1999.

The 605 was based on the Citroën XM (although using a sedan bodystyle), and was successor to the unsuccessful Peugeot 604 which went out of production some years earlier. The popular Peugeot 505 model was thus replaced by two cars - the large family car 405, and the executive car 605.

High equipment levels, a luxurious interior, a smooth ride, and exceptional handling were strong points for the 605. But Peugeot has always struggled to succeed with large cars outside France, and the 605 was no different. It was too similar in design and appearance to the smaller Peugeot 405 to command a price premium, while its dashboard also drew criticism for its uninspired design.

Also like the XM, 605 suffered from grave build quality issues that resulted in a large number of breakdowns or malfunctions (particularly with the ambitious electrics), which severely damaged the car's reputation. It took Peugeot three years to improve these disappointing levels of quality.

PSA Peugeot Citroën has not been able to address the "luxury-brand" issue effectively - the automobile market rewards such segmentation, by brands from one factory - like Lexus/Toyota, Acura/Honda, and Audi/Volkswagen. Consumers demand a certain exclusivity from luxury cars that commodity producers cannot provide.

After the launch of the well-received Peugeot 406 in 1995, 605 sales dropped to near-insignificant levels, and the 605 was quietly dropped in 1999. Cars built after 1992 generally have good build quality and are often surprisingly good bargains on the second-hand market because the model's poor reputation keeps prices down.

The 605's successor, the Peugeot 607, went into production in late 1999 and has been slightly more successful on the domestic and export markets.

The end of 605 production spelled the end of "05" generation Peugeots in Europe after more than twenty years; this generation had started back in 1977 (UK market 1978) with the 305.

Suggest a link relating to Peugeot 605