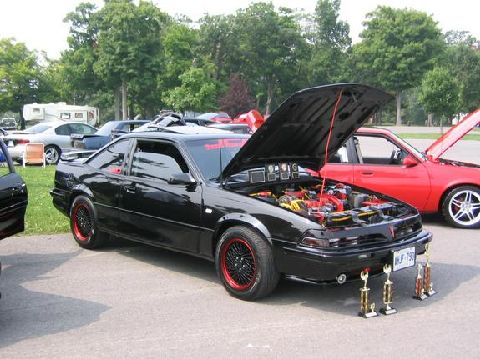 The Sunbird GT model was introduced in 1986 as a coupe, sedan or convertible, with the 1.8L 150 horsepower (110 kW) turbocharged, port fuel injected four cylinder engine standard. This was changed to the 165 horsepower (123 kW), 2.0L Turbo for 1987. All GTs featured semi-concealed headlamps and fender flares and "Turbo GT" Badging replacing "Sunbird" Badging. The Sedan was dropped for 1988, and the interior was redesigned for 1989. The convertible was dropped for 1990, the turbo for 1991. Replacing the turbo four-cylinder for 1991 was GMs venerable 3.1L V6 that produced 140 horsepower (100 kW), but is much quieter than the turbo. After 1993, the GT coupe became the SE coupe when the lineup was consolidated prior to the new model to arrive for 1995.
Source: Wikipedia
Have you any further information on this car?
Click here to tell us.
There are 4 further pictures
[View Full Gallery]
Related Contacts
[ suggest a contact ]
Related Links
[ suggest a link ]