Following on from the 356B Carrera 2, the 356C version introduced a much improved braking system now employing all round Discs with which to slow the car down from its top speed. The new Carrera 2 now used an improved 1966cc engine which also gave it a quick 0-60 time of around seconds.

Although the 356C Carrera 2 was a much improved version of the earlier cars, only 126 were produced before production ended in . 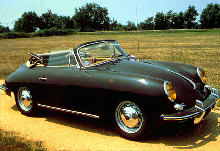