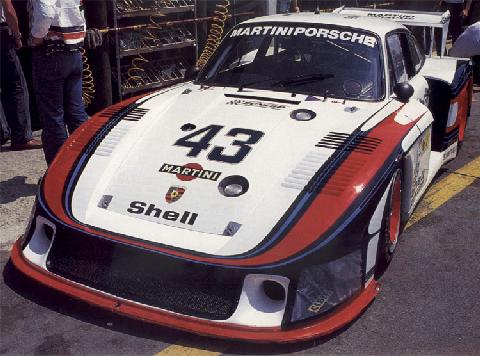 The 935 raced in various championships including the FIA World Championship for Makes, the IMSA GT championship and the Deutsche Rennsport Meisterschaft (DRM). Usually, no other make could challenge the Porsche 935, as each race at the time typically featured at least five 935s due to the availability of customer models. Racing became entertaining for the crowd at the expense of the drivers. The large turbocharger was controlled by mechanical fuel injection which caused turbo lag followed shortly by a fireball spitting from the exhaust and an enormous amount of power (typically 900bhp).

The car debuted in the 1976 season by the Martini sponsored works team in the FIA World Championship for Makes with Jacky Ickx and Jochen Mass partnering in one car and Rolf Stommelen and Manfred Schurti in the other. As under Group 5 rules, also known as Silhouette rules, several significant modifications were allowed (including bodywork modifications, larger wings, wider axles and water cooling), the 935 changed its looks often. First, the whale tail rear wing appeared, then the rear fenders were extended in a similar fashion.

Initially, Porsche were planning to run the 935 with the 930's original hood-mounted headlights in two different guises (the sprint version with a wider version of its wheel arches and a high speed version with modified aerodynamics). However, after carefully studying the rulebooks Porsche discovered a loophole that gave them the liberty to move the headlights into the front spoiler to reduce drag and create more downforce for high speed circuits. This flat nose (also known as the slant nose) became the distinguishing feature of the 935 and was later offered on the roadgoing 930 as the Flachbau, or "flatnose", part of Porsche's Sonderwunsch, or "special wish" program. The sprint setup was rarely used.

935/77
The factory continued to develop and race a factory 935 though. For 1977, the single turbo was replaced by two KKK units, and the body was changed. Customers were not happy that the factory would race them with a newer car, but as the 935/77 was often unreliable, it could be beaten.

935/78 "Moby Dick"
Bob Aiken's 935, a replica of the 935/78 Moby Dick.For 1978, yet another version was developed, the 935/78. It took full advantage of loopholes in the Group 5 rules and was lowered by 10 cm (3.9 in). Because of its shape, with a long front and rear optimised for low drag, the 935/78 was often nicknamed Moby-Dick. The engine was enlarged to 3.2 L and equipped with water-cooled four-valve cylinder heads, increasing its output to 950 hp (about 700 kW). This version won the 6h of Silverstone and was the fastest car on the straight in Le Mans at well over 360 km/h (223 mph), easily passing the prototypes of Renault as well as the teammate Porsche 936, as the Group 6 cars had smaller engines. Adjustment of front and rear downforce allowed the car to reach an absolute maximum speed of 390 km/h (240 mph), comparable to that of the Porsche 917.

935 "K3"
1981 Wera Weissberg Team Porsche Kremer 935 K3Porsche hesitated to sell these Evolution models, so some teams developed their own ideas, especially Kremer Racing from Cologne, Germany. Their 935 K3 (For "Kremer Type 3"; the derivative of the successful K2) driven by Klaus Ludwig, won the 24 Hours of Le Mans in 1979 in heavy rain, beating all prototypes. Coming in second was a factory spec model, driven by Rolf Stommelen, that was supported by team owner Dick Barbour and actor Paul Newman.

Success
Through 1984 the 935 won over 150 races worldwide, including more than 20 class wins. It scored outright wins in the 24 Hours of Le Mans, the 24 Hours of Daytona and the 12 Hours of Sebring. It was also undefeated in the German DRM between 1977 and 1979, posted victories in the IMSA GTX class, and won many races on the famous Nürburgring Nordschleife, including the 1000km Nürburgring. The 935 also took Porsche to victory in the FIA World Championship for Makes each year from 1976 to 1979.

After Group 5 was discontinued by FIA after 1982, the 935 continued to race in IMSA's GTP category, usually entered by smaller privateer names, who were not permitted by IMSA regulations to race the new Porsche 956. By 1985 the days of the 935 were mostly over. Only a handful of 935's remained, and the car was no longer be competitive with the new GTP cars. The 935 was seen in two races in the 1986 season.

Source: Wikipedia
Have you any further information on this car?
Click here to tell us.
There are 9 further pictures
[View Full Gallery]
Related Contacts
[ suggest a contact ]
Related Links

Suggest a link relating to Porsche 935