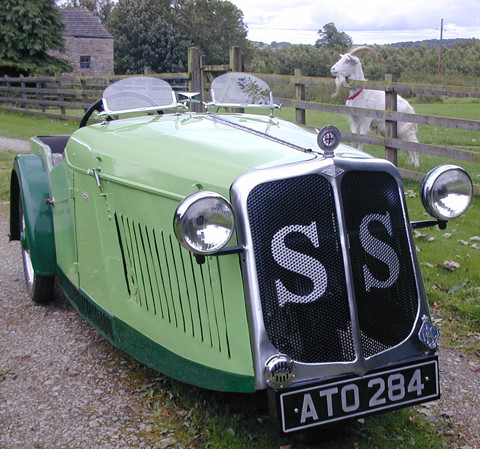 The Safety Seven four-seat tourer weighed a little under 8cwt and had an aluminium body over an ash frame.  Also of three-wheel layout, the rear of the chassis was underslung to give the
car a low balanced look.  A steering wheel was fitted.  A large 'dummy' grille, carrying two side mounted headlamps, fronted a long bonnet of normal appearance and gave quite a pleasing effect to the car.  Two-tone colour schemes in either green or grey were offered as standard, with the rear mudguards and lower body painted in a contrasting shade of the main body colour.  The internal expanding brakes were interconnected to both a foot pedal and a handbrake. A seven inch diameter drum brake was fitted to the single front wheel and the two rear wheels had ten inch diameter drums.  All wheels were interchangeable.

Power came from a 742cc V-twin air-cooled engine driving through a single dry-plate clutch to a three speed forward, plus reverse, gearbox with shaft drive to the two rear wheels.  The accelerator was foot pedal operated.  A top speed of 55mph was attainable and the fuel consumption was reported to be around 60mpg under normal driving conditions.

Priced at £110.5s (25p), about 3,000 were built before production of cars stopped in 1936 and Raleigh returned to the manufacture of bicycles only.
Source: Reg J. Prosser