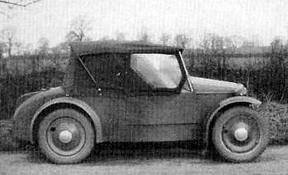 The Scarab did not go into production.  It is believed that only a few were produced.  Apparently, one was shown at the Olympia Show in October 1931 and also at the Scottish Motor Show later that year.

Hans Nibel was the chief engineer of Daimler-Benz , he was involved with the Mercedes-Benz 130, until his death in 1934.  Porsche and Nibel allegedly visited Rover to examine and test the Scarab.