Introduced to the public at the 1936 motor show in 1937 the Flying V8 cost £349. Because V8 was a Ford trade mark this new big Standard 4 door saloon was known as the V-VIII. The 2686cc engine was made from two 10HP cylinder blocks on a common crank case but the stroke was increased. The output was 75BHP which gave acceleration of 0-50mph in just over 13 secs. and a top speed of over 80mph. However the cable operated brakes were poor and the V-VIII did not sell well. It was dropped some time in 1938 but that year the engine was used by Raymond Mays for a 20HP sports car he produced in tourer and drp-head forms. Mays total production of these cars was only 5. 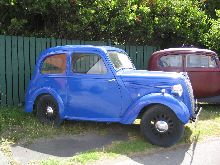