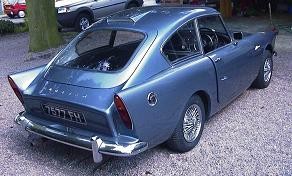 The Harrington Alpine Series C was introduced at Earls Court in October 1962 and became a very limited production, less than 20 cars are thought to have been made. It was probably also a cheaper car to build. The Alpine fins at the rear were still there so the body work was much easier. The car looks very similar to Harrington Alpines except for the large opening at the rear and the ventilation at the back of the roof. It was possible to choose one of three different types of tune ups. The cars were made parallel with the Le Mans production. The production stopped in February 1963. No cars are known to have been participating in any rallies in the sixties.