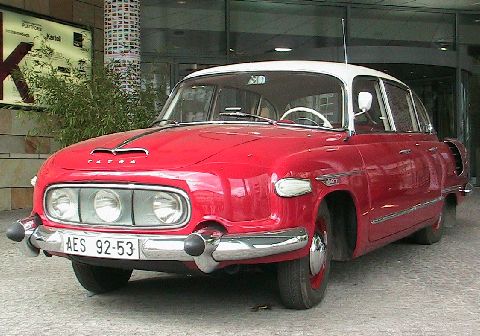 The T603 project was begun in 1953, after the Czechoslovakian government issued the order for Tatra to design and build a car suitable for official duties, to replace the Wolgas and ZILs that were used after production T87 ceased the previous year. The car would have six seats and an engine capacity of not more than 3.6 litres.

The heart of the new car was the newly developed 603 engine by Jiri Klos. A 2,545cc air-cooled V8, it's specification was advanced; oversquare (75 x 72mm), with a single centre camshaft and hemispherical combustion chambers. The engine's first application was in the 4x4 T805, and in its 'military spec' it developed 75 bhp, but it had also been used in some interesting Tatra competition cars, like the T601 Tatraplan Montecarlo and the T602 and T607 sports racing cars. In the new T603 saloon, however, it produced 95 bhp at 5000 rpm.
Source: Motorbase