The car was built from 1967 on an Austin-Healey chassis and then from 1967 on that of a Triumph TR6.  The body was of glass-reinforced polyester and the engine was usually an American Ford V-8.

The car was also available with a British Ford V-6, six cylinder engine from the Triumph TR6 or a Chrysler V-8. 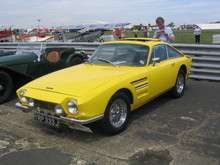