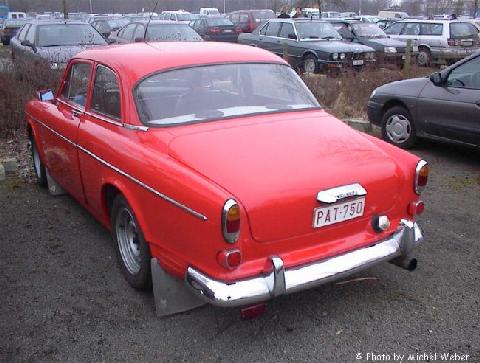 The Volvo Amazon is a Swedish mid-size car made from 1956 to 1970 by Volvo Cars.  It was introduced as an alternative to the Volvo PV sold since 1947.

Compared to the PV the Amazon was a very modern car and featured a wider range of body-styles. It is also notable for being the first car to feature three-point seat belts, and the first to have any kind of seat belt as standard equipment.

The Amazon is known for being a reliable car. Of the 297,000 sold in Sweden 35,000 are still registered and it's believed that around 15,000 are still in use. This reputation for reliability led writer Rosie Thomas to choose the car to compete in the Peking to Paris classic rally.

The first Amazon rolled out of the factory in October 1956. The model number of the Amazon is 120. 121 was the base model with a single carburetor 66bhp engine.  The 122S introduced in 1959 was the performance model equipped with a dual carburetor 85bhp engine. It included the 130 (two door saloon), 120 (four door saloon) and 220 (4-door estate wagon) models.

In 1967 came the 123GT that was a 130 with high compression B18B engine, M41 gearbox, fully reclining seats, front fog and driving lights, alternator, fender mounted mirrors, special steering wheel, dash with a shelf on the passenger side, limited slip differential, and other cosmetic upgrades.

The design was clearly inspired by American cars of the early 1950s, it was heavily modelled on the Chrysler New Yorker saloon and the Chrysler 300C hardtop Coupe. In an interview the designer Jan Wilsgaard said he was inspired by a Kaiser he saw in the harbour.

It originally came with Volvo's new B16 engine, a 3-speed manual gearbox and rear wheel drive. In 1959 the sport model, Amazon Sport, was released and later the same year the Amazon became the first car with a three-point safety belt.  In 1962, Volvo introduced a two door version, an elegant four door combi (wagon), and the new B18 engine, but the two tone paint job and upholstery were no longer available, making interiors rather drab until the introduction of color-coordinated embossed vinyl upholstery and door panels in 1965. The new gearbox selections were the three speed M30 (briefly offered with an automatic electric clutch), the four speed M40 and the M41 with four speed and overdrive.
In 1965 the Borg-Warner BW35 three speed automatic transmission also became available.

While the car was sold as the Volvo Amazon in Sweden, it was marketed using the model number in most other countries, or more in general as the Volvo 122. The reason for this was that "Amazon" was already a registered trademark in one export market, Germany.

A grey Amazon memorably featured in the 1976 film All the President's Men about the Watergate scandal, as the investigative reporter's (Woodward and Bernstein) car.

Source: Motorbase
Have you any further information on this car?
Click here to tell us.
There are 17 further pictures
[View Full Gallery]
Related Contacts
[ suggest a contact ]
Related Links