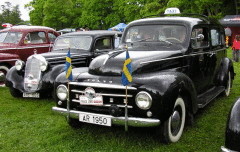 The model was introduced in 1938 with the taxis PV801 (with a glass division between the front and rear seat) and the PV802 (without the glass division). It was also available as a chassis with longer wheelbase called PV810. In 1940 a chassis called PV800 with the same wheelbase as the taxis was introduced. 1947 to 1948 a last series was made with updated engine called PV821 and PV822. A civilian version called PV831 (or "Disponent") was also made. The PV831 was made into the 1950s. When production ended in 1958 Volvo had the project P358 planned, it was to be a large car powered by a V8, but that project was abandoned when they found the home market too small. Instead it became Volvo 164.

In southern Sweden there is still a Sugga in service as a taxi with over 1 million kilometres on the clock.

Source: Motorbase
Have you any further information on this car?
Click here to tell us.
There is 1 further picture
[View Full Gallery]
Related Contacts
[ suggest a contact ]
Related Links