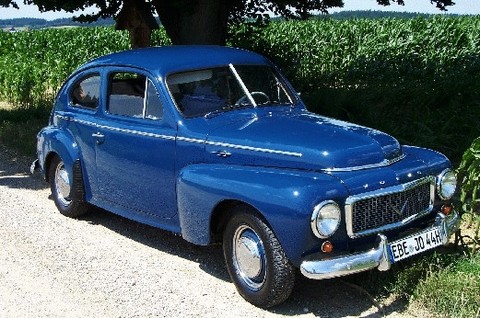 Noteworthy in Volvo history is that the PV444 was the company's first unitary body design. It was also the first four-cylinder engined automobile from Volvo in almost 20 years. The first PV444s were endowed with a three main bearing, overhead valve, 1.4 litre engine of a stout design. Induction was courtesy of a single downdraft carburettor. This powerplant known as the B4B, was the model's mainstay until late in 1955 when a slightly updated version appeared with twin side-draft carburettors. The displacement remained the same but now was fed by a pair of British manufacture SU's carburettors — each with 1.5 inch bores. This brief engine production run was designated B14A.

By the 1957 model year, engine displacement was increased to 1.6 litres and was made available in both single downdraft (B16A) and twin side-draft carburettor (B16B) versions. Even ten years on, these engines owed much to their B4B origins and while not identical had much in common with their forebearers.

Fuel economy was quite above average (30 to 35 mpg) and performance particularly in the twin carburettor engined cars was brisk. The combination of performance and durability won over many two-seat sports car drivers, allowing them a pleasurable drive in the entire family's company if desired.
Source: Motorbase
Have you any further information on this car?
Click here to tell us.
There are 5 further pictures
[View Full Gallery]
Related Contacts
[ suggest a contact ]
Related Links