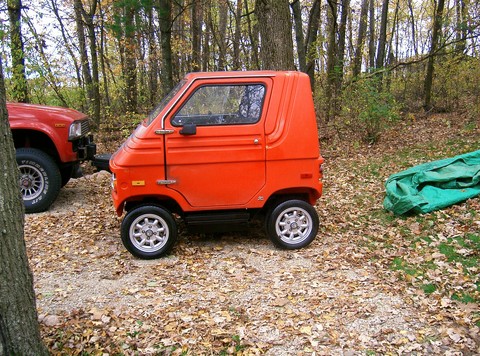 The Zagato Zele was also sold in the US market as the Elcar which had corporate headquarters based in Elkhart, IN.  There were two, two passenger models available; Elcar 1000 and Elcar 2000.  A running chassis was also available.  There was a proposed Elcar 4000 (Wagonette), although only the prototype was known (four-passenger).

The motor works on a successive 24, 36 and 48 volts from a solenoid-operated speed control system (think of it as an " electric manual transmission").

The vehicles had fiberglass bodies with front and rear drum  brakes along with coil spring suspension front and rear.  Much of the suspension and mechanicals were derived from the Fiat 500.  Factory tyres were Michelin X2 145 SR10s.